Though the community was being very respectful of my hermit solitude, before leaving Lama I wanted to get a tour of the place and learn about the community’s mission and way of life.

Bird kindly responded to my request and we spent about forty-five minutes together walking the property. Occasionally we’d cross paths with a member of the community as she or he went about their work. There are about eight people in residence this winter.

Lama sits at the crest of the Sangre de Christo Mountains on 100+ acres, born during the massive spiritual awakening of the 60s. Founded in 1967 by Barbara Durkee (Asha Greer), Stephen Durkee (Noorudeen Durkee) and Jonathan Altman. Lama was incorporated in 1969 as an “educational, religious and scientific” organization. 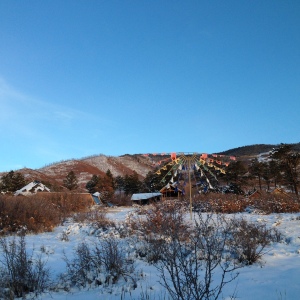 It was one of about thirty communes that sprang up in the region at the time. But by 1973 most of the other intentional communities had closed. Lama has survived these forty-one years thanks to a disciplined, albeit fluid, structure.

The visionary founders were friends with the well-known and very interesting spiritual teacher Ram Dass (b. 1931), who is worthy of a more lengthy introduction for readers who are unacquainted with him.

Under Ram Dass’ given Jewish name Richard Alpert, he holds a doctorate in psychology from Stanford University, was a visiting professor at UC Berkeley and then things got real funky when he took a permanent position at Harvard. There he worked with the Psychology Department, Social Relations Department, the Graduate School of Education and Health Services where he offered therapy.

Growing up Jewish, Richard Alpert was unimpressed with his experience of the Jewish religious tradition and considered himself an atheist. He had no experience of God until he started experimenting with psychedelics with his friend and associate at Harvard, Timothy Leary. These two comrades devoted serious research to the potential therapeutic effects of hallucinogenic drugs like LSD. In 1963 they were both kicked out of Harvard. Leary and Alpert’s lives took drastically different turns from that point on.

While Leary went deeper into the use of drugs and promoted what the US government perceived as threatening social and political ideologies, Alpert went to India with his friend, the yogi Bhagavan Das, and found God. There, his guru Neem Karoli Baba, affectionately referred to by Ram as “Maharaj-ji,” gave Albert the name Ram Dass (“Servant of God”).

After Ram’s spiritual awakening in India, he abandoned the short-lived, temporary “enlightenment” found through psychedelics for the more austere, lasting transformation brought about through spiritual practice.

Subsequently, he founded the Seva Foundation, in Berkeley, an international health organization that has helped return eyesight to over 3.5 million blind people in Tibet, Nepal, India, Bangladesh, Cambodia and Central and South America and Africa. Seva also has worked extensively with Native American communities in the United States. Steve Jobs of Apple served as an early advisor and major contributor of the organization.

Upon his return from India, Ram spent a short season at Lama where his book of wisdom, Be Here Know (1971) was written, illustrated and published by the Foundation. The book has stayed in continuous print and has sold more than two million copies and counting.

“People are ‘called’ to Lama,” Bird said. And no one ever knows who will be called when and how long he or she will stay. People just show up. And stay. Some stay for a visit or a season; others stay for years.

Those who commit to more than a visit form “the circle.” The circle has a template for a way or rule of life from previous years, and the circle is free to customize it to the current community’s desires. For example, the current circle’s winter schedule is:

Various roles and responsibilities for caretaking the property and nurturing the community are assigned—roles like “Cook,” “Hermit Guardian,” “Wood Chopper,” “Composter,” etc. There’s a lot of work to be done on the property, as the community is devoted to permaculture—“human settlement, agriculture, behavior patterns and culture based on natural ecosystems. Using permaculture principles helps people reconnect with the land that sustains them.”

All the living quarters are very humble, simple dwellings with no indoor plumbing and only limited solar electricity. Some of the residences and communal buildings were built by Pueblo people using the traditional adobe construction.

For people born into modern society, it’s hard living in harmony with the land. And living in an intentional community might be even harder. The residents are formed and pressed toward growth just by living and working together in the harsh but life-giving mountains—no curriculum books needed (though there is a huge library available with loads of wisdom to support the individual’s & thus the community’s awakening and development). 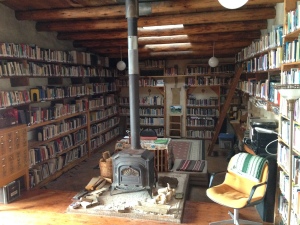 As I toured the property and met some of the people, Lama certainly conveyed an air of being a product of the 60s and a magnet for hippies of all generations. While some might scoff at Lama’s idealized, primitive and somewhat chaotic system, it’s longevity bears significance and the quality of people I’ve met associated with the place invites attention and respect.

As Bird and I walked to the natural spring that provides all of the water for the community, she stopped and remarked, “The mission of Lama is to awaken consciousness, with respect for all religious traditions, in service of the land. That’s what we’re trying to do here.”

As we continued our hike together around the snow-covered, sleepy mountainside it was clear that radical, intentional attempts to live in harmony with the land and learn from all faith traditions was an enduring reality.

I left Lama that day with the compelling impression that the community’s humble commitments, quietly and patiently hidden away from modern society, are contributing to the healing of our world.

While saying our goodbyes, with tears in my eyes, I turned to Bird and said,“Thank you for creating this sacred space for me, for guarding my hermitage and for all you’re doing to heal the world.”

“Thank you for your work with Gravity,” Bird replied. “Your work is also very important.”

Apart from You I am nothing

With you I am everything

Live Your life in and through me for the healing of the world.